COVID-19 Update: During this unusual time, we want to keep you up-to-date on changes here at Caslon. We continue to do our very best to provide for our customers. Read More 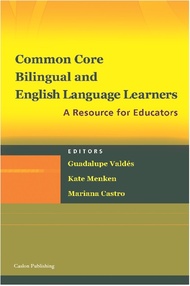 Guadalupe Valdés is a professor at Stanford University. She is also a founding partner of Understanding Language, an initiative that focuses attention on the role of language in subject-area learning, with a focus on helping English language learners (ELLs)/emergent bilinguals (EBs). Valdés’ work over a period of 30 years has focused on the English–Spanish bilingualism of U.S. Latinos and on discovering and describing how two languages are developed, used, and maintained by individuals who become bilingual in immigrant communities.

Kate Menken is an associate professor of linguistics at Queens College of the City University of New York (CUNY), and a research fellow at the Research Institute for the Study of Language in Urban Society at the CUNY Graduate Center. She is also co-principal investigator of the CUNY–New York State Initiative for Emergent Bilinguals, which develops the knowledge base of school principals and staff to transform language policies and practices in schools enrolling emergent bilinguals (EBs).

Mariana Castro is the Director of Academic Language and Literacy Initiatives for the World-class Instructional Design and Assessment (WIDA) Consortium, a consortium of 35 states and territories that have joined together to develop standards-based resources and assessments to support the language development and academic achievement of English language learners (ELLs)/emergent bilinguals (EBs). Throughout her career, Mariana’s work at the school, district, national, and international levels has focused on the roles of educators in supporting student learning. Her passion for education is energized by the amazing work of teachers who draw on the linguistic and cultural resources of students and communities in diverse contexts.